For over 20 years, hundreds of women throughout Mississippi and other states have attended South Central Regional Medical Center’s Women’s Life Conference since it began in 1990. To celebrate the 65th anniversary of South Central Regional Medical Center, the 2017 conference will be open to men and women of all ages. This event, hosted by the South Central Health Care Foundation, is known to feature internationally recognized speakers. The 2017 event will proudly feature Rick Burgess, the co-host of the nationally syndicated Rick and Bubba Show and bestselling author, father and husband. Along with featuring keynote speaker Rick Burgess, the event will host The Southern Fried Chicks comedy group.

Rick Burgess and The Southern Fried Chicks Live! Event will be a day filled with laughter, joy and education for how relationship management impacts a person’s overall well-being. This 2017 event will be held on Saturday, April 29th from 1 p.m. – 5 p.m. at Jones County Junior College Fine Arts Auditorium in Ellisville.

The afternoon will kick-off with nationally known comedy group, The Southern Fried Chicks. Featured on CMT, HBO and numerous other programs, this top-grossing all female comedy tour keeps their audiences filled with laughter with stories of life and love. Etta May, Sonya and Mia will have men and women crying from their excessive laughter for an hour.

Rick Burgess is the co-host of the nationally syndicated Rick and Bubba Show, heard across the nation on 70 plus radio stations and seen daily in over 100 markets via the Heartland Network. Rick has appeared numerous times on Fox News and has co-authored several New York Times bestsellers and charted two comedy CDs on Billboards comedy chart.

Rick has spoken at countless events across the country mixing comedy with the message of the power and peace found only through faith. Rick is the husband of the former Sherri Bodine, the father of 5 children Brandi, Blake, Brooks, Brody and Bronner. Rick’s eulogy of his youngest son became the number one viewed YouTube video in the world for one week.

A panel of local relationship experts will participate in a “talk show styled” panel and will answer some of the most commonly asked questions by men and women today. The quality of our personal relationships also has an enormous impact on our physical health and emotional health. During this event, South Central Regional Medical hopes to bring joy, laughter and education to the forefront of attendees. 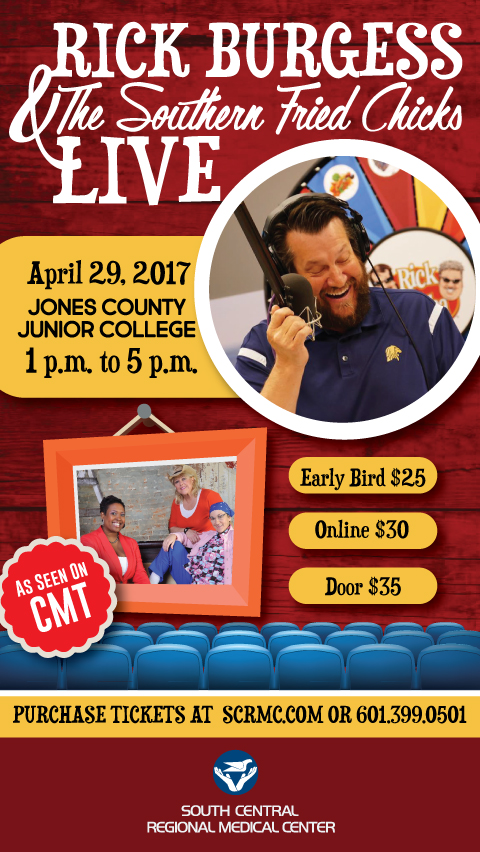