In the last 50 years, the world has seen much change. The creation of the computer, the methods of communication, new healthcare discoveries, transportation and social interactions are a few ways of how society has evolved. During those 50 years, South Central Regional Medical Center (SCRMC) has had the privilege of an employee experiencing those changes and more during her tenure. Lenora Dexter, Food Services Call Center Associate, began her service at Jones County Community Hospital (JCCH) on May 15, 1967 and continues to provide service at SCRMC 51 years later. 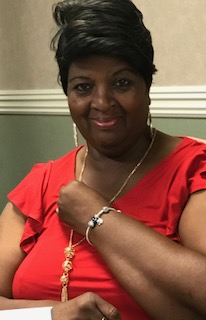 Ms. Dexter began her time at JCCH under the direction of Ms. Helen Wilson, Director of Dietary. Ms. Dexter stated, “Ms. Wilson hired me in May of 1967. During that time, she was our director, the department secretary, handled our payroll and served as the dietitian for the hospital. She provided guidance and education for my career. Our department was less than 20 people at the time, and I began on the tray line.”

Along with assisting on the tray line for distribution of patient room trays, Ms. Dexter assisted with the small cafeteria and catering within the hospital. She stated, “It was a much smaller team, but we worked together to assist each other. I enjoyed visiting with patients, learning from my co-workers and lending a helping hand. When we finished in one area, we never stood around. We went and helped the next area.”

After 10 years of service on the tray line, Ms. Dexter transitioned into diet clerk. During the 1970’s, there were no computers, typewriters, or even pens to use for patients’ orders. “I started with a pencil, paper and diet order card for patients. I would work with our dietitian to help sort the nutrition needs for patients’ food based off what the physician ordered. Once the order was ready, we would use a pulley system to send food from the kitchen to the nursing floor and ring a bell. Years later, we would transport food trays in giant buggies.”

In 2011, SCRMC implemented Hotel-Style Room Service, which allows patients to order their meals when they would like it. Along with ordering at their own time frame, patients can select items from an expansive menu based on their dietary needs. Ms. Dexter serves as a Call Center Associate within Food Services, so she assists patients with placing their orders and making sure their dietary needs are implemented.

In her 51 years at SCRMC, Ms. Dexter has served under nine directors in Food Services. She became known as more of an advisor and would frequently be referred to as a “Mama Hen or Grandma” of the department. “It was important that our team knew we were a family,” said Lenora. “We pulled together to complete whatever work we had to do, and then moved to the next task.”

Ms. Dexter has thoroughly enjoyed her time at SCRMC. “I enjoy being here. Often, I would give up my off days to come work. I learned many different roles in the department and it helped me grow a lot. I also learned how to make yeast rolls, cinnamon rolls and cakes from our bakers, so I really enjoyed that part.”

Today, Ms. Dexter serves under Glenda McCraw, Director of Food Services, at SCRMC. “To say Lenora is an asset is an understatement,” said McCraw. “Lenora can do any job in this department and can do it well. She started from scratch in this department and has completely evolved into an essential member of our team. She treats her co-workers like family, and they respect her. Along with co-workers, the patients enjoy Lenora.” 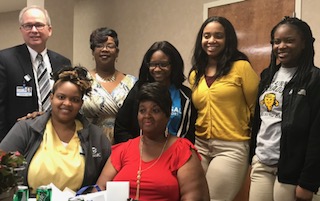 Ms. Dexter has four children, Teresa, Adella, Adell and Lanita. She raised her three nieces, Phyllis, Tina, and Shannon, after her brother’s passing. Along with children, Ms. Dexter has eight grandchildren, two great grandchildren and three great, great, great grandnieces and nephew.  The father of her children, Adell Payton, previously served as Supervisor in Dietary. While working at SCRMC, she put her four children through college, and provided support to her family. Her daughter, Lanita, currently works at SCRMC in the Coding department.

Ms. Dexter is considering retirement in the near future but she is not in a big hurry. When Ms. Dexter was asked how she plans to spend her days in retirement, she said “I am definitely going to sleep late some mornings, but I will also exercise more, go visit my friends and family and travel.” Ms. Dexter shared that she never flew until 2014. “I was so nervous to fly, but my children bought me a plane ticket to Las Vegas. So I prayed about it and was very nervous, but I was the first one on the plane. We enjoyed the trip, were able to site see and win a little money in the process. I look forward to making more memories like that.”

South Central Regional Medical Center greatly appreciates the service Ms. Lenora Dexter has provided to our health system over the past 51 years. Her smile, dedication and attitude are a great attribute to our mission statement: Excellent Care and Service. Every Patient. Every Interaction. Every Time.