The physicians and staff of South Central General Surgery welcome Seth Ladd, DO, to the facility. Dr. Ladd is a native of Jones County who graduated from West Jones High School in 2005. He is an undergraduate of Mississippi State University, where he finished with a Bachelor of Science in 2009. Dr. Ladd was in the first medical school class at William Carey University College of Osteopathic Medicine, a program he completed in 2014. 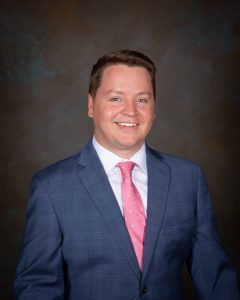 “I feel honored to join the experienced surgeons at South Central Regional Medical Center,” said Dr. Ladd.  “During medical school at William Carey, I received training and experience in pre-clinical and clinical rotations at SCRMC. I worked closely with the surgeons during that time, so it really is like coming home.”

“After I graduated from William Carey, I moved to New York City to pursue my career in general surgery. I did my internship in Queens, New York, at St. John’s Episcopal Hospital. I really enjoyed my time in New York. In my opinion, being trained in New York helped to prepare me for anything I can encounter anywhere else. During residency training, I did a fellowship at Johns Hopkins Hospital in Baltimore, Maryland, in burn and reconstructive surgery. The amount of skills I gained, the confidence I was able to build in myself as being a fellow, being in charge of other people and being in charge of someone else’s care completely was definitely one of the best experiences I could have had for myself at that time.”

General surgeons have specialized knowledge and experience related to their patient’s diagnosis, preoperative, operative and postoperative management, including the management of complications. “As a general surgeon, I am trained in a wide breadth of procedures,” said Dr. Ladd. “I am experienced in procedures such as acute care surgeries, gallbladder removal, hernia surgery and surgeries of the GI tract. I am also trained in burn and reconstructive surgery, as well as robotic surgery.”

General surgeons play a large role in patients’ wellbeing. Dr. Ladd explains, “I am dedicated to walk through the diagnosis process and road to recovery with each patient. By seeing their experience through their eyes, the care becomes personal. I find joy in being able to solve a problem and improve their quality of life.”

Dr. Ladd and his wife, Susan, recently relocated to Laurel from New York. “I am excited to be a resident of Jones County again. The growth that has occurred in Laurel over the past few years is amazing. We eagerly anticipate the opportunity to become a part of the community and serve the residents of Laurel and Jones County.”